A Day to Travel 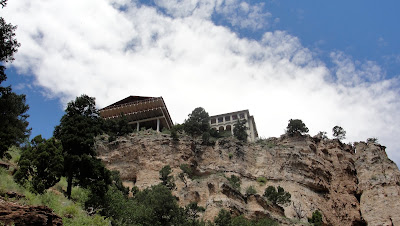 I took a trip yesterday. It was the longest I've been away from my son since he was born as well as a large step for my company. I managed to visit Ralph's Sewing Machines to look at future investments, stocked up on smudge sticks, traveled to an intentional colony to propose a Tipi job, visited some friends, and saw a wonderful play.

My day started shortly after 8 am when I left the house and dropped off items at the Post Office on my way out of town. I stopped at the sewing machine store in Denver only to confirm I was right in assuming an industrial sewing machine would cost me around $1,200. On the upside it would last me a lifetime with how well I treat my machines and Ralph's offers excellent service on the machines they sell.

I left the sewing shop and headed to Wings of Eagles, a Native American themed store, in the Heritage Shopping Square in Golden. It was my first time there and after a lengthy drive that involved many U-turns I found them. My grandmother recommended I get my smudge sticks there, it was where she went when she lived in Colorado. They had local artists on display along with jewelry and other assorted Native American items.

I took a quick lunch break in Boulder to try a local coffee shop's Salami, Tomato, Basil, and Mozzarella Panini along with a cup of joe. It was fabulous! The potato chips were homemade (score!) but didn't have any salt. I couldn't find any salt in the place either.  :/  I still ate them all and got a 25 cent refill on my coffee.

After lunch I headed to the intentional colony outside of Loveland to propose a tipi job to them. Long story short: an almost epic failure. Realizing that I have no business education and, try as I may, had no one to rehearse with; I would say I tried my hardest. I'm still disappointed in myself though. What was I thinking when I forgot a business plan? Even I know that's step one. Failure two...? Not knowing the mathematics behind how my product would benefit the company investing me. Wow, I messed up. There's really no other way to say it. On the bright side the gentleman who was kind enough to take the time to meet with me seems open to letting me have a "do over." Rest assured, if I am lucky enough to have another go at it, I will be over prepared if I'm anything.

I was able to chill with my friend, Adam, from high school after the meeting. It was nice being able to catch up and see how each of us has grown up. He is working at the intentional colony currently and enjoying dating a girl he met there. They seem to be of like minds, which I know is a rarity for him to find. Such a unique mind, I feel blessed to have friends that form their own thoughts and opinions.

After Adam and I painted a Canvas Bag I designated as my "Tiny Tipis Promotional Bag" I headed back to Boulder for a musical another of my dearest friends was in. "Beautiful Radiant Things," by North Fork's own Marty Durlin, was one of the best theatrical experiences I've had the pleasure of viewing. The music was fitting, the humor was witty, the message was bold, and the acting was top notch (and consider the performers volunteered their time!) I was able to catch up with my friend Marian afterwards, which; made the entire drive worth it. She is such a gentle soul, so amazing and beautiful inside and out. She inspires me.

Finally after a long day I headed home at around 10 pm. The long drive was made short by all the lessons I had to mull over in my head. My mind wandered between possible improvements to my business and things that had been said between friends that day. It was sort of overwhelming to a woman who has almost grown accustomed to seeing the same four white walls every day... not bad though. Not bad at all.

Posted by Tiny Tipis at 7:34 PM No comments:

Shipping is a major part of any company these days as the internet digs it's claws deeper into every corner of the earth. People in Russia could be reading a blog that you might have written for an American audience! Such is the nature of the beast though with Twitter, Facebook, Pinterest and the likes taking over the generation I grew up in. Today, I discuss shipping because I had a first for my business. Today, I shipped Internationally for the first time.

I hadn't planned on shipping globally yet. I figured it would be months, maybe even years, before I would need to. When I received a note from the buyer saying I could send it to either a United States or Australian address I was at first inclined to send my canvas items withing where I am familiar, but; that brought up questions. What would it cost? Was it reasonable? Should I expand my company to serve that many people?

I quickly pulled up the USPS website and typed in the info I had. The page loaded and I scanned down the prices until I got the option I normally use within the US. Well, I thought, that's not as scary as I expected. Besides, it really wasn't up to me if it was reasonable or not. The buyer could decide for themselves.

I sent my customer the prices I calculated plus a dollar of buffer. I gave them more options than I anticipated I could have this early on. The response came quick along with a paypal payment to my account. The deal was good! I had my first customer located in Australia and my first chance to expand past the boundaries of the United States.

The next morning I packed my truck with boxes and envelopes to ship including the envelope marked for Australia. My stomach gurgled at me with nerves as I hopped in the drivers seat. I knew the principal of what I had to do. Step 1, find the correct forms. Step 2, figure out how to correctly fill our said forms. Step 3, hope I calculated my prices right.

I was lucky and got to the Post Office during a slow time so there wasn't a line. It always makes it easier to interrogate the workers about shipping regulations when there isn't a chain of angry impatient people behind you. To my surprise, I had grabbed the exact forms I needed. Check a box here, enter a weight there, fill in the addresses, and sign the bottom... the lady stamped the square in the corner of the page I filled out and complemented me on needing minimal guidance.

I asked if there was a way I could take a few extra customs forms so next time I needed to ship international I would be more organized for them. The lady helping me was thrilled. "Of course!!! We encourage it!"

On my way home I thought about all the times I had mailed letters as a child. As I grew up technology started to take over the times I would have normally slapped a stamp on an envelope. Bills, letters to family, photos, Christmas cards with money... all things I can do easier from a computer.

I felt triumphant. It didn't matter how simple the process was, it was something I was clueless on and highly unsure of. I had shied away from it but now I saw that there were so many more customers available. Shipping need not stop me now.

For today I close with this thought:

May we never stop learning with soft hearts and open minds. Let us conquer the world with love and knowledge. Never give up.

Posted by Tiny Tipis at 9:45 PM No comments:

Tiny Tipis
The power of Canvas compels me to create things with love and respect for the earth. Recycle, reuse, and re-love anything and everything. I believe in the power of people to change themselves and their surroundings. Happiness is my goal, love is my hobby, and caring is my job. I hope that someday people will have access to the knowledge needed to be self-sustaining with as little impact on our planet as possible.